Dirty Beasts and other chamber works 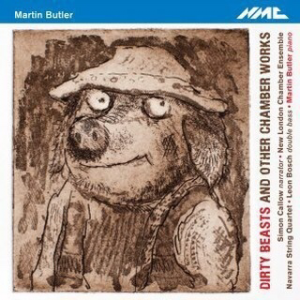 Read about the CD launch

“The piece I enjoyed most was Butler’s wind quintet, Down-Hollow Winds… played by members of the New London Chamber Ensemble… I enjoyed it a lot in this well-balanced recording from the NMC label… It’s an eloquent showcase of Butler’s music”

Listen to the review (c.20 minutes)

“Accompanied by the New London Chamber Ensemble, the lip-smacking Simon Callow is great as the narrator”

“New release from NMC the best so far this year” 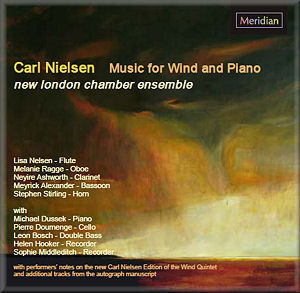 Music for Wind and Piano

“…the performances and sound quality are outstanding in every regard – this is a very important disc in the Nielsen discography and it is recommended very highly indeed.”
Robert Matthew-Walker, International Record Review

“No sooner had the plane touched down from a fabulous trip to Italy working with Angela Hewitt at the Trasimeno Music Festival, than rehearsals began to complete our Nielsen CD. Working with the ever good-humoured and fabulously patient Richard Hughes and Susanne Stanzleit, we found ourselves again in Meridian’s renowned “Natural Sound” recording venue. This little church is famous amongst performers not only for its excellent natural acoustic, but also for being under a Heathrow flight path!

The CD includes Nielsen’s works for winds and piano which we were delighted to be recording with guest pianist Michael Dussek (Fantasy for clarinet and piano, Fantasy Pieces for oboe and piano, Canto Serioso for horn and piano, two miniatures for flute The Fog is Lifting and The Children are Playing for flute solo). Mike also recorded three beautiful works for solo piano (the Three Pieces Op 59); and, of course, the recording includes that centrepiece of the Quintet repertoire – the Op 43 Wind Quintet.

Just to add a bit of spice to the project, in the gap between our first and second recording sessions for this CD, Nielsen’s publishers – Hansen Edition in Denmark – produced their exhaustive new edition of Nielsen’s works. So, we had it couriered over specially for the recording and it arrived just in the nick of time to record the Quintet. This beautiful hardback volume includes pages and pages of editorial notes and revealed plentiful anomalies between manuscripts, autographs and current printed editions, all of which were greeted with eager pencils ready to annotate performance parts. Lively discussions ensued as to which alterations to include in the recording; even the very first note in the clarinet part of the Quintet was up for debate! It was official – the nlce had become ‘Nielsen Nerds’. Eventually we couldn’t resist doing a few takes of versions that had existed in Nielsen’s earlier sketches – rapidly nicknamed ‘the nerdy takes’. Maybe we should we re-title the CD Nielsen for Nerds?! So excited were we by our newly discovered passion for authenticity (well …… ‘nerdiness’) that we are now offering a Nielsen lecture recital entitled “Why bother with manuscripts?!”; as the publicity material states, “in an informal lecture recital, the nlce’s combination of good-humoured pedantry and practicality is designed to illustrate to music students the joys and necessities of looking at source material, as they themselves did to inform their recent recording of these works.” 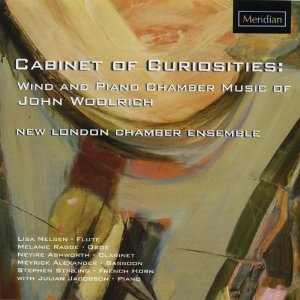 “The New London Chamber Ensemble sounds utterly at home in Woolrich’s music, shaping lines and phrases with such ease and comfort that at all times the musical surface is a thing of great beauty…”
International Record Review May 2007

The chamber music of the internationally-respected composer, John Woolrich, is both intense and private. As fellow composer and writer, Robin Holloway, notes “his music whispers, whirs, rustles, creaks, and shines with a gentle light, often elegiacal”. Nowhere is this more apparent than in his works for wind instruments and piano, played sensitively and passionately in this recording by the New London Chamber Ensemble with the accomplished pianist Julian Jacobson. This CD, originally conceived as a celebration of Woolrich’s 50th Birthday, also includes previously unrecorded works written especially for the New London Chamber Ensemble. 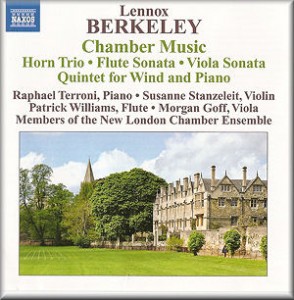 “…all offer excellent performances and are very well recorded with plenty of air around the sound and clean separation. Another excellent disc from Naxos, well worth the modest price.”
Gramophone Magazine.

“Stephen Stirling’s horn playing is magical…Morgan Goff brings both sensitivity and charisma [to the Viola Sonata]. Pianist Raphael Terroni is a constant throughout these performances and is clearly a demur yet supportive chamber player.”
BBC Music Magazine, August 2010 (4 stars)

Lennox Berkeley amassed over 100 works and contributed to almost every genre. Since he had the opportunity to write for some of the leading performers of the time—the Horn Trio was written for Dennis Brain—chamber music featuring wind and strings held a particular attraction. The Sonatina can also be performed on recorder and piano; in which guise its artless amalgam of Baroque and neo-Classical traits has ensured its popularity. The Viola Sonata is among the more sombre of Berkeley’s works and perhaps reflects something of the times—the aftermath of the Second World War—in which it was written. The Quintet for wind and piano is among the more extended chamber works from Berkeley’s later years.