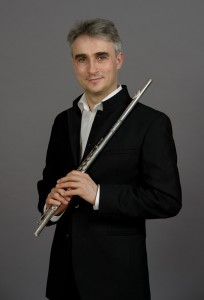 Robert Manasse is working as a free-lance flute-player with a wide variety of orchestras including the English Chamber Orchestra, BBC Symphony Orchestra, London Sinfonietta, Academy of St. Martin in the Fields, City of Birmingham Symphony Orchestra, Welsh and English National Operas, The Philharmonia, BBC National Orchestra of Wales,  London Philharmonic, Bournemouth Symphony Orchestra and the Britten Sinfonia. He is a member of the London Mozart Players, works with Jane Manning’s contemporary music group Jane’s Minstrels, and with the chamber music groups CHROMA and the Galliard Ensemble. Robert has a long-standing duo with the harpist Helen Cole. He studied with Kate Hill initially, and then later with Michael Cox and Sebastian Bell as a postgraduate at the Royal Academy of Music.

Robert has taught at Dartington International Summer School, for the Royal Academy of Music, at the Junior Guildhall and at the international Kammermusik Festival in Oxford as part of the Albion Ensemble. He teaches at the Junior Department of the Guildhall School of Music in London.

Recordings include the award-winning CD of music by Harrison Birtwistle made in association with the Galliard Ensemble, music by Tony Payne played by Jane’s Minstrels, and arrangements of Beethoven played by the Albion wind ensemble.

Robert plays a silver Louis Lot flute from 1883. He read Applied Biology at Imperial College and later took a PhD in Plant Biochemistry.